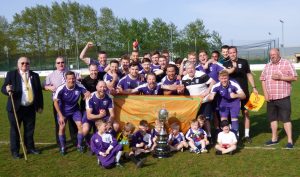 Daventry Town FC is a community-based Football Club operating as a Not-for-Profit Organisation since June 2016.

Since the previous owner, Iain Humphrey handed all control of the Football Club to a small group of supporters in 2016, the club has gone from strength to strength, both on and off the pitch.

On the pitch, the club has made a successful return to the Southern League after winning two league titles in just 3 seasons. This was under the shrewd management of former Town player, Arron Parkinson ably assisted by former Town keeper Matt Finlay. The club has also won both the UCL Knock Out Trophy and the Buckingham Charity Cup for the first time in their history and were due to play Kettering Town in the Northants FA Cup Final before COVID-19 intervened.

The club has also started a Reserves team which will reap dividends, in the near future, nurturing youth team players prior to them moving up to the first team. A Ladies team also returned this season and they improve with every game they play.

The Junior side of the club is also on the increase with over 350 local children of all abilities playing or involved with the club.

Our Annual Summer Super 6 Tournament is now one of the best in the Midlands drawing teams from all over the country to the Town. In 2017, over 200 teams attended the weekend and next time, we plan to hold an additional weekend for Ladies, girls, disabled and walking football Super 6 tournament.

From September this year, we will start our exciting partnership with the Parker EACT Academy and Daventry 6th Form College to start of our own DTFC Football Academy.

All of the above now means that the club have a clear football pathway and cater for all abilities from 4 years of age up to 70 plus.

In the community, we have teamed up with local professional footballer, Ryan Haynes, and our projects to make sure no child in Daventry goes hungry during school holidays and also our Christmas Food hampers which were handed out to just under 100 of those most in need at Christmas time.

At the heart of the club, we were fortunate to have inherited a fantastic clubhouse facility, something that always brings comments from our visitors and guests. This is being  used on a regular basis for Weddings, Parties, Wakes and is the centre of our own functions such as the DTFC Music Festival, Bingo and our Charity Boxing Night.

Currently, and for the best part of the last year, like most businesses, we are on hold. The Clubhouse remains empty and quiet. We hope the NHS will take us up on our offer to use the facility

So a massive thank you to everyone who has helped or is helping in any of the above and getting this club back on its feet in such a small period of time, be it as a supporter, a sponsor, holding or attending a function or by just calling in for the odd drink now and again.

As we are mostly volunteer based, we always need additional help, if you can help even if it is just for a few hours a month then we would welcome your involvement

We are also looking for local businesses to get involved with the club helping it to continue with its growth and future community based projects.