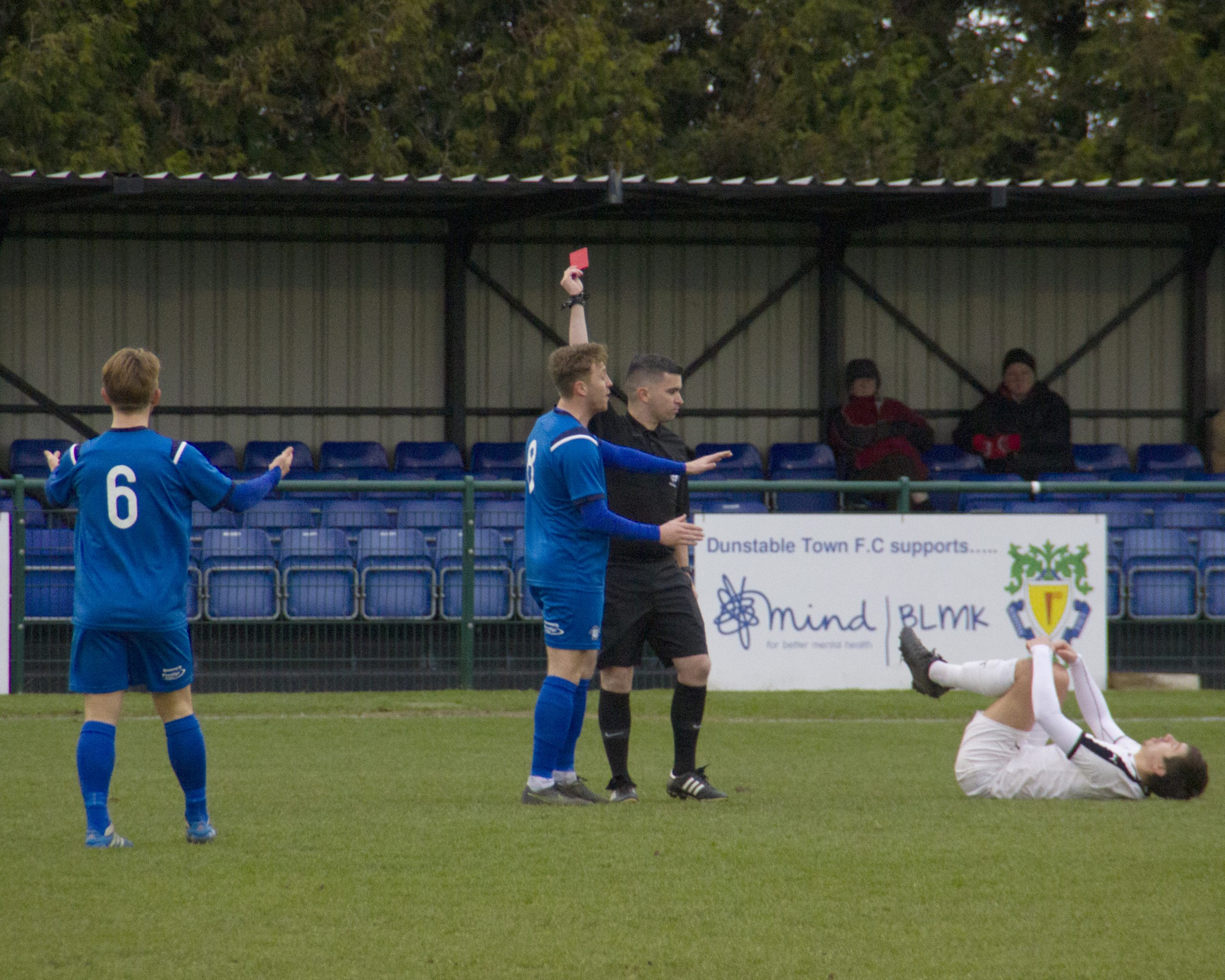 Wow! How to describe the game that had everything?!

The record books will forever show Daventry Town getting a creditable draw on the road to AFC Dunstable.
However, that doesn’t tell the story of what has been a dramatic day!

3 sendings off for the home side, 4 goals, and numerous bookings were on display today as Daventry travelled to AFC Dunstable.

The sending off happened just after AFC Dunstable had taken the lead. Daventry’s new goalkeeper James Martin had no chance to stop a well struck shot from the edge of the area by Taylor Rhiney which arrowed into the top corner.

1 sending off became 2 half an hour later when Bernard Christie was given marching orders for what, no one is quite sure of. There was talk that he kicked Daventry’s Aiden Print, but no-one really knew.

Before the second sending off however the game had seen the game swing in Daventry’s favour. Jack Bowen scored from close range in the 32nd minute, following up Jack Finch’s excellent shot from distance which had struck the bar and bounced down. Just five minutes before half time, Daventry full back Aiden Print curled in a shot from the edge of the area that gave the keeper no chance to score his first goal for Daventry. Aiden was mobbed by his team mates, and has fast become a popular player in Daventry colours.

As expected, the second half saw Daventry dominate possession with most play being in the AFC Dunstable half. However, as seen in recent weeks, the little bit of quality to unlock the defence wasn’t there and Daventry couldn’t break down the 8 men behind the ball. Efforts from Fitzgerald, and a disallowed goal for offside which thwarted Jack Bowen were as close as it got.

The job was made even harder on 66 minutes. Joshua Crawley scored for AFC Dunstable following up from a spilled save by James Martin to equalise.

There was further drama as referee Mr O’Donnell had a final chance to flourish his red card with 2 minutes left, booking Christian Tavernier for the second time to leave AFC Dunstable with 8 players.

Credit to the 8 men who defended resolutely to the final whistle and got a creditable draw. However, its another 2 points dropped by Daventry from a winning position.

No game next week, the next home game will be on the 21st December verses North Leigh.