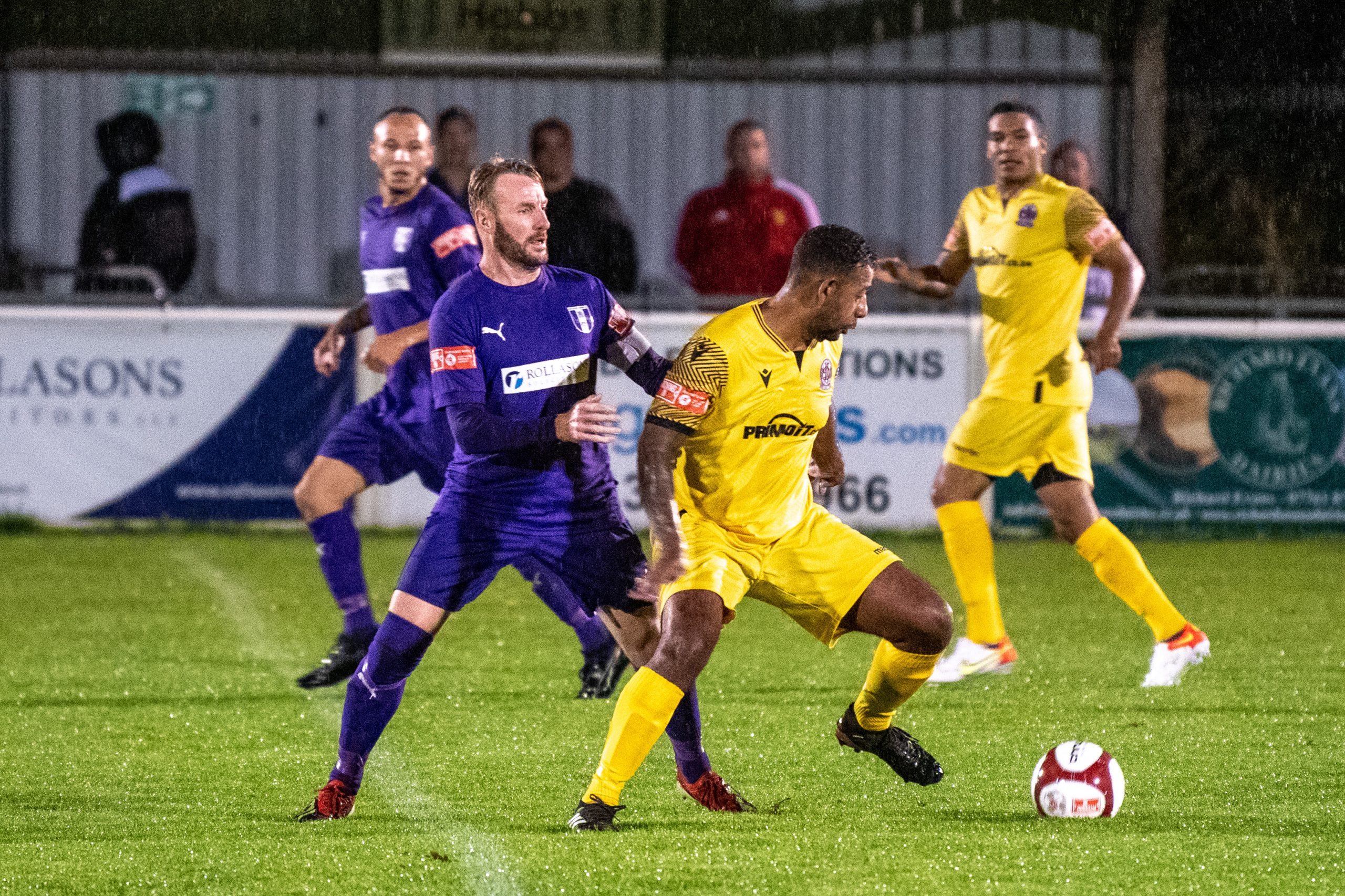 By Richard Nunney   |   September 29, 2021
Leave a comment
Prior to the game, the worry was whether the game would go ahead with the amount of rain that had fell down on Elderstubbs throughout the day and evening. After 90 minutes Daventry would have wished the groundstaff hadn’t done such an excellent job to get the game on!
Daventry actually made a bright opening as the game kicked off in horrendous conditions. The result at Stamford the Saturday prior gave the team confidence and hopes were high to continue that form.
Unfortunately those hopes were shattered in the 9th minute when a spilled shot from James Martin was turned in by Shepshed’s Jordan Smith.
Still, despite the setback Daventry continued to battle. In a poor first half there were limited chances for Daventry, George Ball’s strike from the edge of the area which went over was the closest just before half time.
The second half was a disappointment as Daventry never got going. Another early goal was conceded as Ben Starkie scored past James Martin 40 seconds on the resumption of the half. A third went in from Karl Demidh after a good passing move through a static Daventry defence in the 58th minute.
Shepshed were then gifted a penalty when Jeff Woodward fouled a Shepshed player in the box and received a red card. The penalty was slotted home by Demidh again on 72 minutes.
Less than 5 minutes later Daventry were down to 9 men. Bleu McNeil received a second yellow card for a soft looking foul in front of the stands and was sent off.
The final act of the game came on 81 mins when John King curled a shot in past James Martin with the aid of a post.
Line Ups:
Daventry Town: 1 James Martin, 2 Joe Coleman (Lewis Irwin 51′), 3 Bleu McNeil, 4 Ross Harris, 5 Jeff Woodward, 6 Adam Confue (Luke Emery 51′), 7 George Ball (Aiden Print 60′), 8 Joel Nketia, 9 Jack Bowen, 10 Carter Price, 11 Taylor Orosz
Subs: 12 Lewis Irwin, 14 Luke Emery, 15 Jarvis Wilson, 16 Archie Elmore, 17 Aiden Print
Shepshed Dynamo: 1 Brandon Ganley, 2 Jahdahn Harper, 3 Shaquille O’Neil Brooks, 4 Jordan Smith, 5 Sean Doy , 6 Niall Prenderville (Abdul Koroma 39′), 7 Karl Demidh, 8 Liam Canavan (Jiah Medrano 77′), 9 Matt Melbourne (John King 60′), 10 Reece Morris, 11 Ben Starkie
Subs: 12 Jake Betts, 14 Tamar Clayton, 15 Abdul Koroma, 16 Jiah Medrano, 17 John King
Tuesday 28th September 2021, 7.45pm
Northern Premier League – Midlands Division
Attendance: 62
Referee: Mark Stevens
Share Now