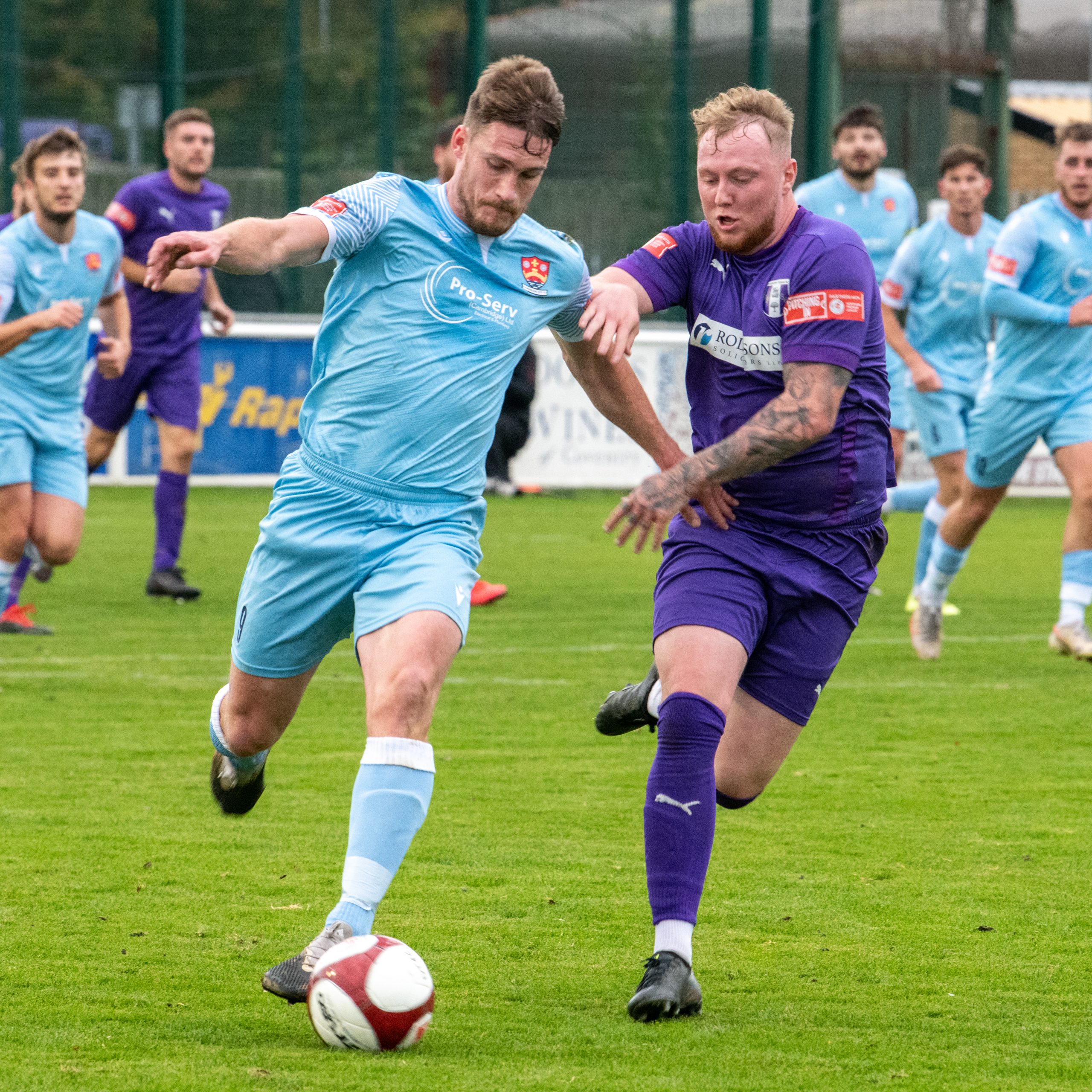 By Richard Nunney   |   October 23, 2021
Leave a comment
Daventry’s recent good form came to an end with a crushing 4-0 home defeat to Cambridge City in the Pitching In Northern Premier League Midlands.
An early goal set the scene for a difficult day for the Purple Army as Jarid Robinson was found unmarked in the box to side foot a low cross after just 10 minutes.
Moments later Daventry had the ball in the net, but this was disallowed after the goalkeeper had been adjudged to have been fouled.
A non eventful first half was capped off on the stroke of half time as Cambridge made it two. Ryan Sharman being credited with the goal heading past James Martin.
The second half started with an improved Daventry performance. A spell of pressure gave the purple army encouragement they would get back in the game. Indeed this may have been the case if Jack Bowen’s chance on 53 minutes had hit the post and gone in rather than hitting the post and bouncing out. This luck summing up Daventry’s season so far.
The game was sealed in the 61st minute after Cambridge had been awarded a penalty. This was given after Ross Harris had fouled Ryan Ingrey. Sharman’s penalty hit down the centre of the goal.
Just minutes later Cambridge’s fourth was scored. A volley from Taylor Parr went in off the post, although Daventry’s defending left a lot to be desired in the build up to the goal.
A late shot parried by James Martin and a crashing effort that came off the bar finished off the game for Cambridge as they came away with the three points.
Line Ups:
Daventry Town: 1 James Martin, 2 Dan Childs (Jeff Woodward 72′), 3 Aiden Print (Bleu McNeil 56′), 4 Ross Harris, 5 Jarvis Wilson, 6 Adam Confue, 7 Taylor Orosz, 8 Carter Price (Joel Nketia 46′), 9 Jack Bowen, 10 Lewis Irwin, 11 Nat Gornal-Tyler
Subs: 12 George Ball, 14 Bleu McNeil, 15 Jeff Woodward, 16 Joel Nketia, 17 Archie Elmore
Cambridge City: 1 Dan George, 2 Tom Wood, 3 Seb Simpson, 4 Isaac Maynard, 5 Jordan Gent, 6 Taylor Parr, 7 Ryan Swift (David Haynes 73′), 8 Jarid Robson, 9 Ryan Ingrey (Neil Midgley 86′), 10 Ryan Sharman (Connor Barnes 66′), 11 Mikey Davis
Subs: 12 Connor Barnes, 14 David Haynes, 15 Neil Midgley, 16 Robbie Nightingale
Saturday 23rd October 2021, 3pm
Northern Premier League – Midlands Division
Attendance: 159
Referee: Richard Eley
Share Now