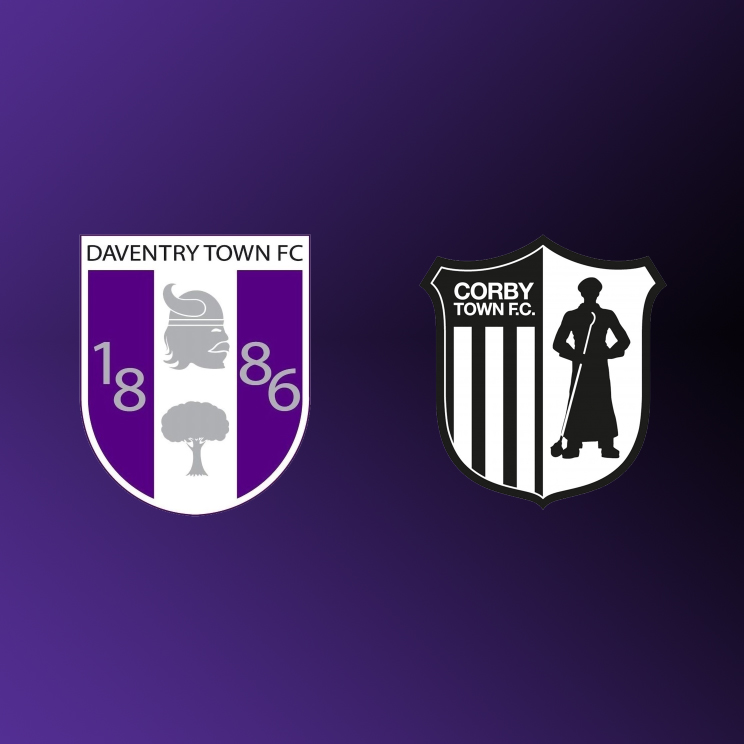 Corby Town moved to the top of the table for the first time this season when coming from behind to beat Daventry Town in front of the biggest crowd (186) seen at the Elderstubbs since the home team returned to the Southern League.

The Steelmen now lead Berkhamsted by two points whilst Daventry will need to win their next two league games against struggling teams St.Neots and Wantage to remain in touch with the play-offs places.

Despite a strong start by Corby the home team took the lead against the run of play when man-of-the-match Adam Confue sent a curling 20-yard left-footed shot into the net after 20 minutes.

The equaliser came almost immediately for a well-organised Corby side which benefited from a long clearance by goalkeeper Dan George. John Dean’s pinpoint cross was headed home by Jordon Crawford.

Worse was to follow for the Purple Army. In the 43rd minute goalkeeper Iustin Cerga misjudged a Jake Duffy corner, allowing John Dean to fire home from close range.

Daventry used all three substitutes in the second half but Corby continued to call most of the shots with assistant player-manager Elliot Sandy hitting the crossbar before Crawford fired over the bar with the goal at his mercy.

The visitors running off the ball was far superior to Daventry’s and it came as little surprise when the lively Crawford rounded off the scoring with a second goal in the 87th minute.

In the Southern League itself though Daventry may have to settle for mid-table obscurity after punching above their weight to achieve two UCL promotions in three seasons.