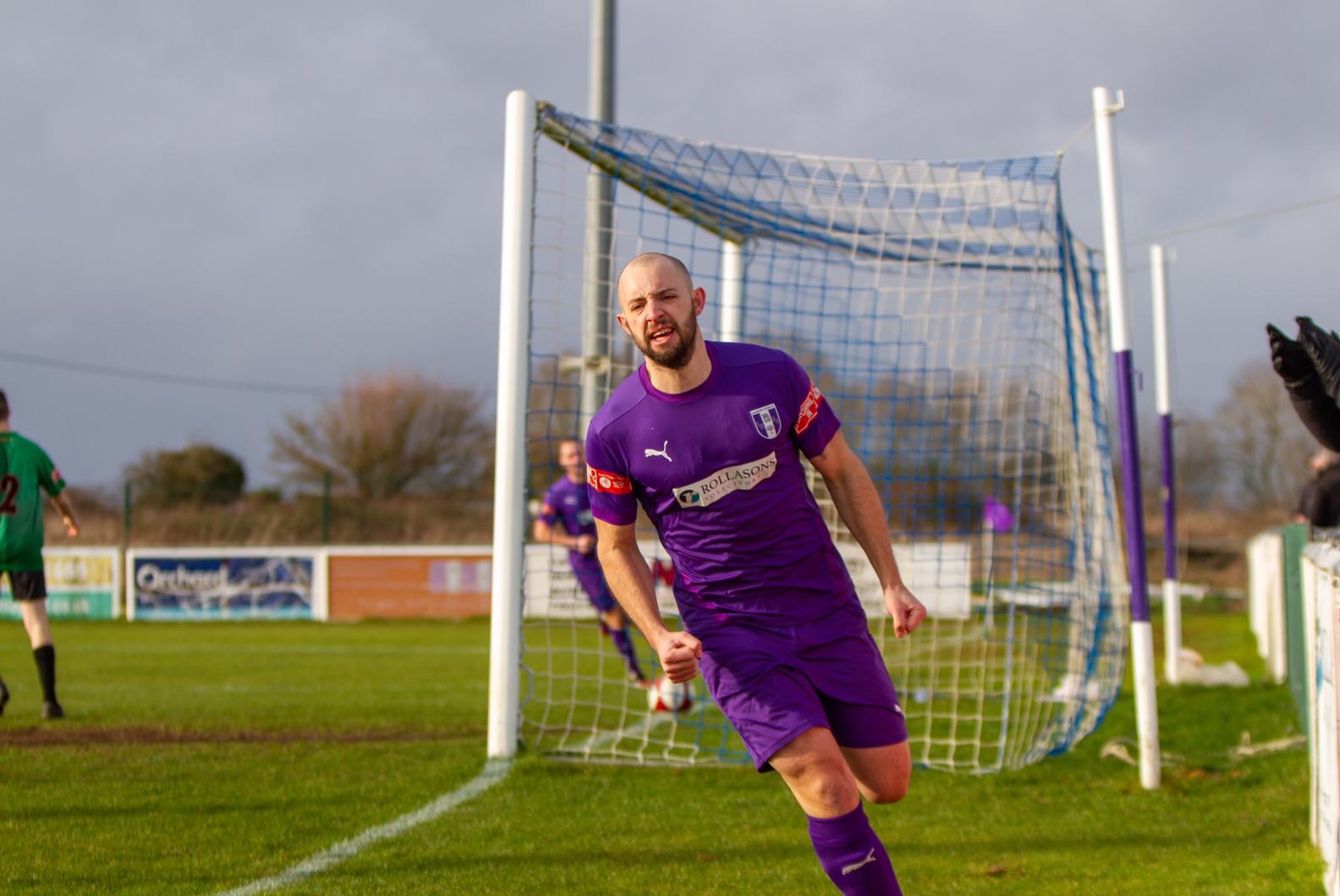 By Richard Nunney   |   February 5, 2022
Leave a comment
An early Tom Lorraine goal set Daventry on the path to a hard fought victory over fellow strugglers Sutton Coldfield this afternoon.
Lorraine’s goal on just 3 minutes was a half volley after a knock down from Jack Bowen.
The early start helped settle the nerves in a scrappy first 20 minutes where there was little to report.
Daventry got their second of the game on 22 minutes. George Ball stooping to head a goalward bound flick on from Adam Confue. Initially given to Ball, the dubious goals panel will no doubt have to review the replay to see who had the final touch!!
Sutton Coldfield came back into the game as the first half progressed and had a couple of chances which James Martin did well to deny. A one handed save on 41 minutes and then another on the stroke of half time kept the scoreline in Daventry’s favour.
The second half saw a slightly improved performance from Daventry but without getting the killer third goal. This wasn’t without trying! There was drama in the 59th minute when Jack Bowen was bought down by the Sutton keeper. The referee played advantage and Nat Gosnal-Tyler had an open goal to hit into. However, he put his shot over the bar and the advantage was lost.
Daventry controlled the remainder of the game – half chances for Bowen the closest they got as the saw out the game and got a massive 3 points! This result has now moved Daventry 10 points clear of the relegation zone, with our next match on Tuesday at Bedworth United.
Line Ups:
Daventry Town: 1 James Martin, 2 Joe Coleman, 3 Bleu McNeil , 4 Ross Harris, 5 Lewis Burgess, 6 Adam Confue, 7 George Ball (Taylor Orosz 65′), 8 Joel Nketia (Dan Childs 88′), 9 Jack Bowen, 10 Tom Lorraine, 11 Nat Gosnal-Tyler (Dylan Wilson 73′)
Subs: 12 Dylan Wilson, 14 Taylor Orosz, 15 Jamie Andrews, 16 Dan Childs
Sutton Coldfield Town: 1 Jonathan Brown, 2 Tom Hurley, 3 Brett Lloyd , 4 Aris Christophorou, 5 James Beresford, 6 Luke Redfern, 7 Harry Crook (Harry Eden 53′), 8 Jack Burgess, 9 Ellis Corvin (Leo Brown 62′), 10 Jack Sang (Kye Billingham-Bell 73′), 11 Isai Marselia
Subs: 12 Jehdell Hamilton, 14 Kye Billingham-Bell, 15 Harry Eden, 16 Leo Brown
Saturday 5th February 2022, 3pm
Northern Premier League – Midlands Division
Attendance: 202
Referee: Callum Parke
Share Now