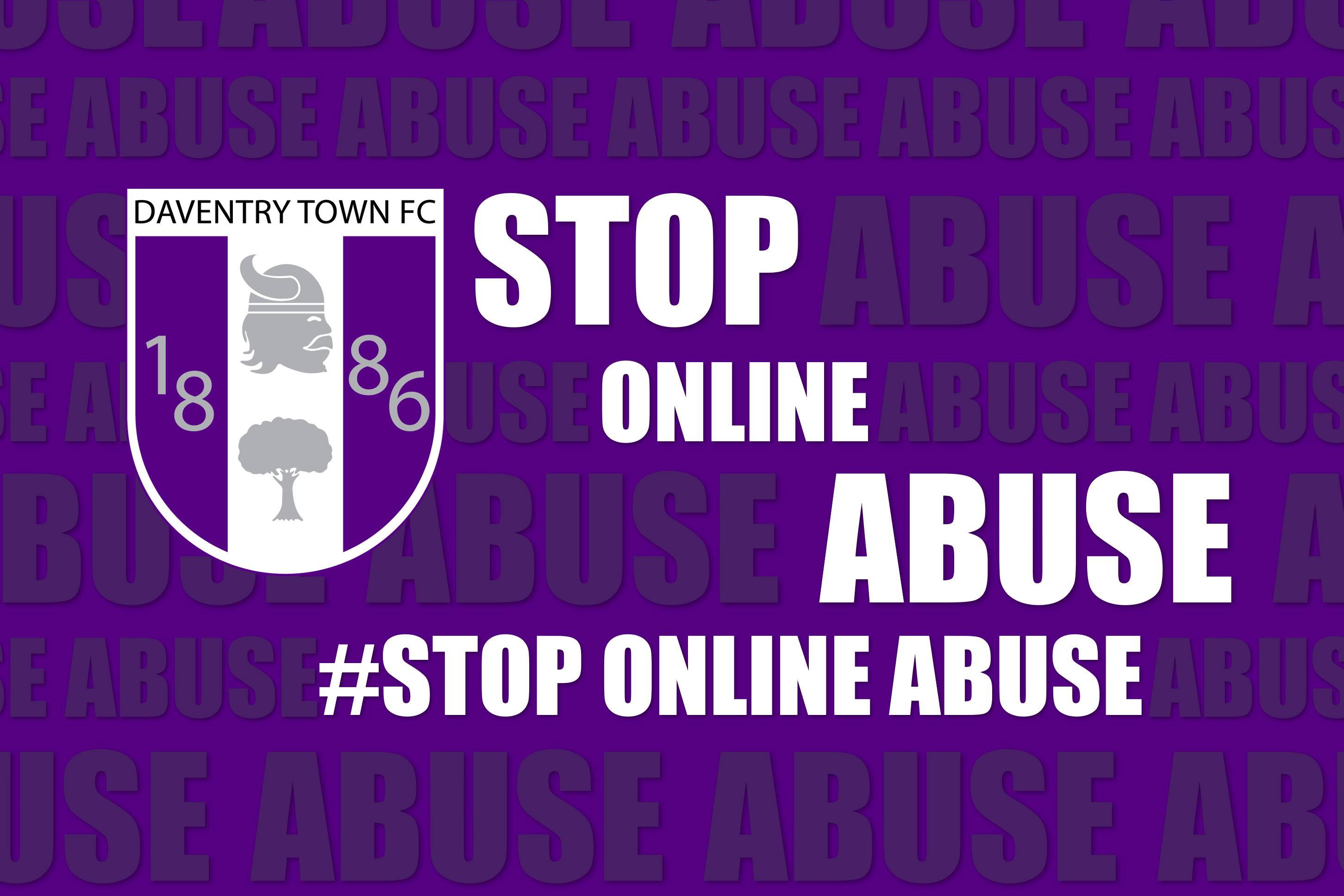 Daventry Town is in support of the actions taken as a collective by Premier League and EFL, The FA and other clubs across non league, women’s football pyramid and grass roots football in uniting for a social media blackout from 15.00 Friday 30 April to 23.59 Monday 3 May.

This is to create awareness of the issues surrounding online abuse and highlight the greater preventative measures required by social media platforms to stop online abuse occurring.  Tackling online discriminatory abuse is a priority for us all.

Please read below for more information

The FA, Premier League, EFL, FA Women’s Super League, FA Women’s Championship, PFA, LMA, PGMOL, Kick It Out and the FSA will unite for a social media boycott from 15.00 on Friday 30 April to 23.59 on Monday 3 May, in response to the ongoing and sustained discriminatory abuse received online by players and many others connected to football.

This has been scheduled to take place across a full fixture programme in the men’s and women’s professional game and will see clubs across the Premier League, EFL, WSL and Women’s Championship switch off their Facebook, Twitter and Instagram accounts.

As a collective, the game recognises the considerable reach and value of social media to our sport. The connectivity and access to supporters who are at the heart of football remains vital.

However, the boycott shows English football coming together to emphasise that social media companies must do more to eradicate online hate, while highlighting the importance of educating people in the ongoing fight against discrimination.

In our letter of February 2021, English football outlined its requests of social media companies, urging filtering, blocking and swift takedowns of offensive posts, an improved verification process and re-registration prevention, plus active assistance for law enforcement agencies to identify and prosecute originators of illegal content. While some progress has been made, we reiterate those requests today in an effort to stem the relentless flow of discriminatory messages and ensure that there are real-life consequences for purveyors of online abuse across all platforms.

Boycott action from football in isolation will, of course, not eradicate the scourge of online discriminatory abuse, but it will demonstrate that the game is willing to take voluntary and proactive steps in this continued fight.

Finally, while football takes a stand, we urge the UK Government to ensure its Online Safety Bill will bring in strong legislation to make social media companies more accountable for what happens on their platforms, as discussed at the DCMS Online Abuse roundtable earlier this week.

Edleen John, The FA’s Director of International Relations, Corporate Affairs and Co-Partner for Equality, Diversity and Inclusion, said:  “It’s simply unacceptable that people across English football and society more broadly continue to be subjected to discriminatory abuse online on a daily basis, with no real-world consequences for perpetrators. This needs to change quickly, and we continue to urge social media companies to act now to address this. We will not stop talking about this issue and will continue to work with government in ensuring that the Online Safety Bill gives sufficient regulatory and supervisory powers to Ofcom. Social media companies need to be held accountable if they continue to fall short of their moral and social responsibilities to address this endemic problem.

“We have recently seen how powerful it can be when everybody is united for the good of the English game. We are calling on organisations and individuals across the game to join us in a temporary boycott of these social media platforms, to show solidarity and unite in the message that English football will not tolerate discrimination in any form.”

Premier League Chief Executive Richard Masters said: “Racist behaviour of any form is unacceptable and the appalling abuse we are seeing players receive on social media platforms cannot be allowed to continue.

“The Premier League and our clubs stand alongside football in staging this boycott to highlight the urgent need for social media companies to do more in eliminating racial hatred. We will not stop challenging social media companies and want to see significant improvements in their policies and processes to tackle online discriminatory abuse on their platforms.

“Football is a diverse sport, which brings together communities and cultures from all backgrounds and this diversity makes the competition stronger. No Room For Racism represents all the work we do to promote equality, diversity and inclusion and tackling discrimination.”

Trevor Birch, Chief Executive of the EFL said: “EFL clubs have expressed a clear desire to take a united stand against abhorrent racist, discriminatory, and threatening abuse on social media platforms which we fully support alongside the rest of the football family.

“While we recognise the value and role social media plays in our game, online abuse will not be tolerated and we will continue to strongly pursue all avenues open to us to affect change.

“The boycott is only part of the work being undertaken in this area but further highlights the need for social media companies to take additional responsibility for the inappropriate and unwelcome behaviour that appears on their platforms.

Simone Pound, Director of EDI at the PFA said: “Social media channels represent an extension of the working environment for professional footballers, and as the players’ union, we are committed to finding solutions that better protect our membership and the wider community from online abuse.

“As part of our work to address this issue, which started with the 24-hour #Enough boycott of social media channels, the PFA has been pushing for collaboration between the platforms, the game, the Government, police and CPS to find solutions and protect players from the abuse they face daily.

“In 2021, with a collective voice, we can hold social media companies to account and send a powerful message to a global audience – abusive behaviour is unacceptable.”

Sanjay Bhandari, Kick It Out Chair, said: “Social media is now sadly a regular vessel for toxic abuse. This boycott signifies our collective anger at the damage this causes to the people who play, watch and work in the game. By removing ourselves from the platforms, we are making a symbolic gesture to those with power. We need you to act. We need you to create change.

“We need social media companies to make their platforms a hostile environment for trolls rather than for the football family. We need the Government to hold its nerve and keep its promises to regulate. The Online Safety Bill could be a game changer and we aim to help make that happen. There should be no space for hate and everyone can play their part. If you watch, work in or love the game, join in.”

Richard Bevan, Chief Executive at the LMA said: “The LMA fully supports the social media boycott across the professional game.   A unified silence will send a loud and powerful message to those that perpetrate online abuse that their actions will no longer be tolerated, and to the social media companies that they have a responsibility to do everything in their power to eradicate online hate.

“We also urge Government to understand the significance of this collective action and to ensure that its Online Safety Bill delivers appropriately strong legislation.”

Kevin Miles, Chief Executive of the Football Supporters’ Association said: “The Football Supporters’ Association is fully behind the game’s efforts to stamp out online hate and discrimination and will join next weekend’s social media boycott. Much media attention has rightly focused on the vile abuse aimed at players, managers and journalists in the men’s and women’s game and we see that aimed at fans groups too. It has to stop.

“Many of our most active fan groups tell us that they have received disgusting abuse when they are doing nothing more than trying to represent their supporter base. It’s a threat to the very existence of supporter organisations who are run by volunteers in their spare time. As fans we stand with players, managers, referees and all in the game in calling for the social media companies to step up.”