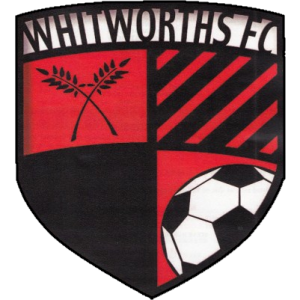 Town welcomed back Adam Confue who came in for the injured Tom McGowan. Joe Merrill made his first home appearance of the season in place of Ollie Stanbridge. The Flourmen had finished runners up to Town in the 2016/17 UCL Division 1 winning season. 6 Town players from that season were in the starting line up. The visitors now sadly sit bottom of the Premier Division with a side totally rebuilt since that season.

Light drizzle fell at the start of the match however the pitch looked in excellent condition thanks to the volunteer’s hard efforts during the morning to prepare this surface.

Top goal scorer Luke Emery had the first chance of the afternoon after he got behind the defence however from a tight angle his shot flashed across the front of the goal.

Adam Confue spotted the keeper off his line and tried an audacious effort from 35 years out but Adam Honour was wise to it and got back to save.

The Flourmen did have a chance to create something with a free kick however Confue was there to head the danger clear.

20 minutes in a Luke Emery header put Taylor Orosz in, however Honour made an excellent stop from close range.

Bryan Badu who was lucky not to get a caution for a late challenge on Dan Childs early on, had the visitor’s first real effort however he could only fire straight at Iustin Cerga.

Chances were coming but Town were getting closer. On the half hour mark, Kieran Fitzgerald cut in from the right and his fine effort appeared to be curling towards the far top corner of the net however Honour got up to it and tipped it over the bar.

The goal eventually came in the 37th minute when LUKE EMERY forced his way along the left side of the penalty area before firing in an unstoppable shot into the far corner of the net.

Just two minutes later and Town went further in front when an ADAM CONFUE glancing header from close range, after a Taylor Orosz’s cross, gave the keeper no chance.

It was effectively game over in the 44th minute when LUKE EMERY smashed home a loose ball after a Town corner for his 24th UCL goal of the season.

As with the first half, it was all Town as they pushed for the fourth goal.

Taylor Orosz went close with a free kick from the edge of the box that just cleared the bar.

Adam Confue appeared to have scored his second with a thumping header that crashed against the crossbar before bouncing on the goal line according the officials.

Just a minute later and ADAM CONFUE has scored his second. After a mazy run into the box, his first effort was blocked by a defender however the ball fell kindly for the big midfielder and he opened his body up before picking his spot just inside the right post.

Another decent Town move ended with Luke Emery netting what appeared to be his third hat trick of the season however the assistant flagged for offside.

Elsewhere Deeping Rangers closed in on second placed Rugby Town with a 2 0 win at Eynesbury whist the Butlin Road outfit crashed to a surprise 2 0 defeat at 16th placed ON Chenecks.

Town now travel to Kirby Muxloe in Leicestershire on Tuesday night 7.45pm before locking horns again with Wellingborough Town at the Duck and Dog next Saturday. 3pm kick off.

Town’s next home match is against Rothwell Corinthians on Saturday 26th January 3pm kick off.

Wishing @nptfc all the very best of luck in today's non league final. You can do it!! ⚽️🏆🏅

Get your ticket for our charity event PARTY ON THE PITCH at the clubhouse today!