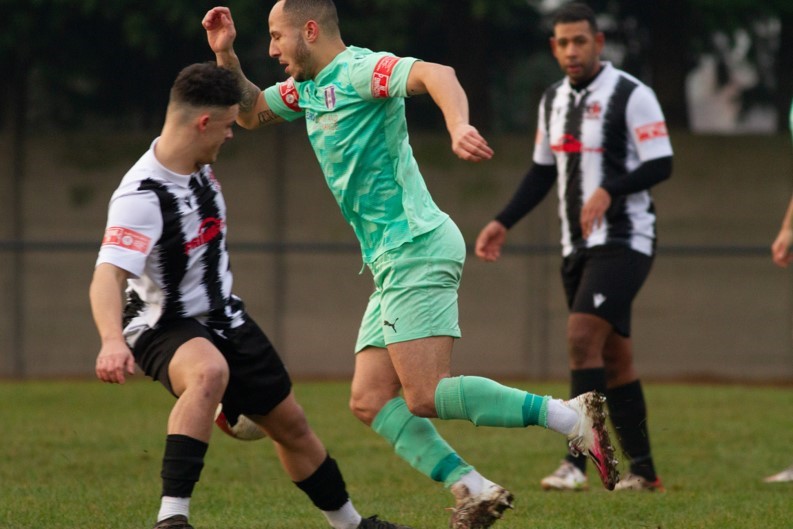 By Richard Nunney   |   January 15, 2022
Leave a comment
Taylor Orosz’s breakaway goal in the first half wasn’t quite enough to give Daventry all three points as a soft penalty gave Shepshed a way back into the game.
The hosts started off strongly, James Martin forced into an early save before Shepshed missed an open goal after the ball had been pulled back just minutes later.
Daventry got back into the game and pressed hard for an opener. Tom Lorraine had a chance on 23 minutes heading wide before the opening goal just minutes later.
A long clearance was flicked on by George Ball for Taylor Orosz to run on to. The winger went through one on one and slotted home courtesy of the post to give Daventry the lead with 27 minutes on the clock.
This lead stayed until 48 minutes gone in the second half when a soft penalty was given for a foul which no-one really saw clearly. The resultant penalty was slotted home by Matt Melbourne who sent keeper James Martin the wrong way.
Daventry continued to press and created some good half chances. A great cross from Ball was nearly converted by Lorraine and Orosz, both sliding in but not quite reaching the ball. Jack Bowen had a header over from a free kick, and Confue had a shot from distance.
Shepshed had the best chance of the second half when James Martin was forced to make a good save after a Shepshed player was left alone in the box, the Daventry keeper made himself big.
With the last real goalmouth action being Jack Bowen’s fierce shot which was tipped round the post with ten minutes to go, both sides will feel a draw was a fair result.
Other scorelines went in Daventry’s favour, and the purple army are now 4 points clear of Wisbech in the relegation playoff zone.
The next action for Daventry is on Saturday when Spalding United travel to Elderstubbs.
Line Ups:
Shepshed Dynamo: 1 Matty White, 2 Jahdahn Harper , 3 Shaquille O’Neil-Brooks, 4 Jordan Smith, 5 Toby Ritzema , 6 Niall Prenderville, 7 Dempsey Arlott-John (Andy Kanga 84′), 8 Cain Noble (Jack McMillan 66′), 9 Matt Melbourne , 10 Jack Rogers (John King 67′), 11 Reece Morris
Subs: 12 Jiah Medrano, 14 John King, 15 Andy Kanga, 16 Jack McMillan, 17 James Snedden
Daventry Town: 1 James Martin, 2 Joe Coleman , 3 Bleu McNeil, 4 Jamie Andrews, 5 Jeff Woodward , 6 Adam Confue (Dan Childs 82′), 7 George Ball, 8 Joel Nketia , 9 Jack Bowen, 10 Tom Lorraine (Ethan Lack 70′), 11 Taylor Orosz (Nat Gosnal-Tyler 75′)
Subs: 12 Ethan Lack, 14 Nat Gosnal-Tyler, 15 Dan Childs, 16 Callum Martin, 17 Ross Harris
Saturday 15th January 2022, 3pm
Northern Premier League – Midlands Division
Attendance: 248
Share Now