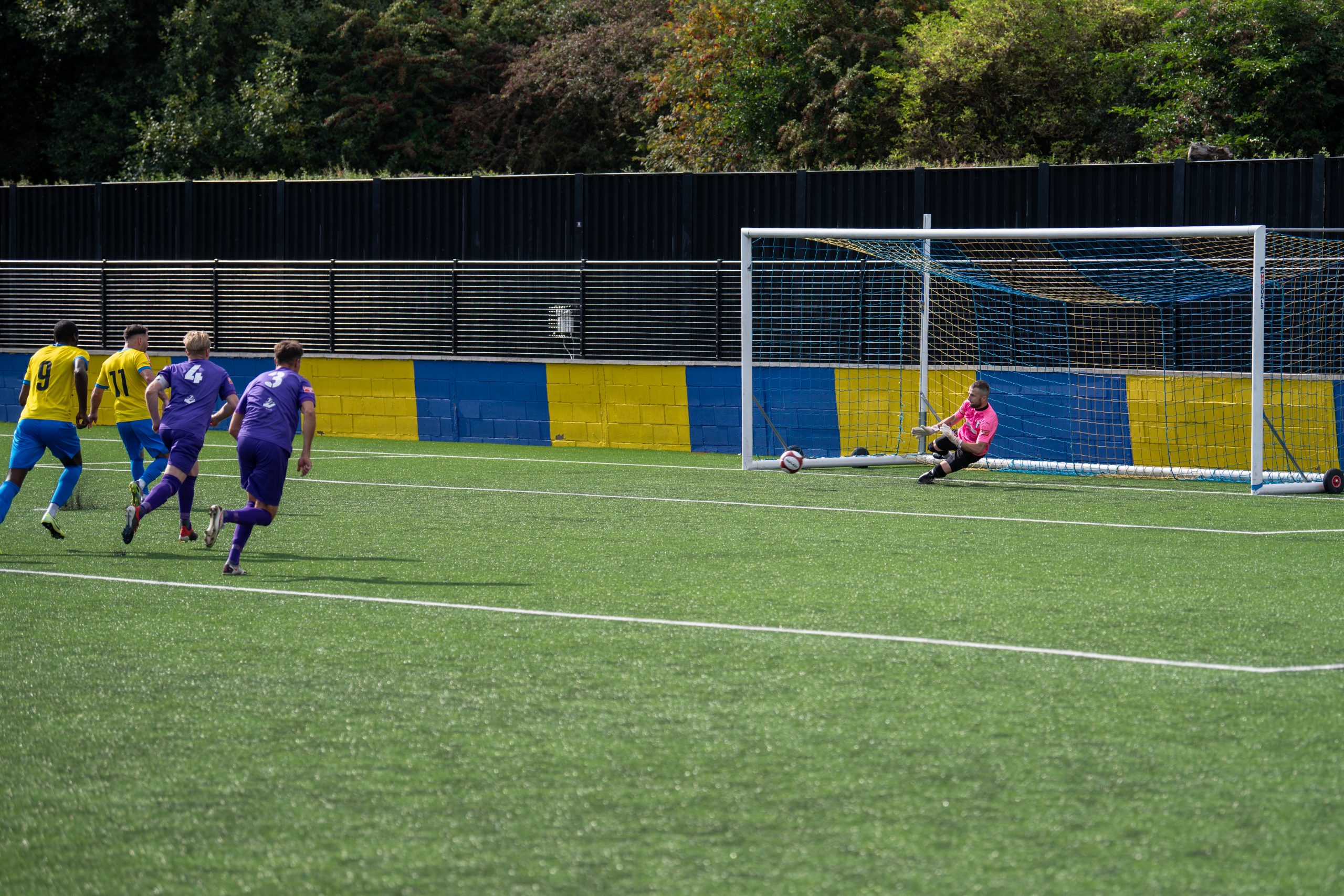 Daventry Town played out a thrilling 1-1 draw at Sporting Khalsa on Saturday afternoon.

The Purple Army were involved in an eventful game of football in the West Midlands as Daventry Town’s keeper Iustin Cerga had a game to remember.

The early chances went to Sporting Khalsa as the contest commenced, the first effort brilliantly saved by Cerga low down right under his throat.

Halfway through the first half, the hosts were awarded a penalty after Nat Gornal-Tyler brought down Sporting Khalsa’s Jake Gosling in the box.  Gosling took the resultant penalty which was saved nicely, as Cerga went the correct way to his left.

Cerga would continue to have a special game making a double save just a few minutes later to keep the scores level.

Although Sporting Khalsa continued to apply the pressure there was a period in the first half for Daventry which looked for promising just before half time. Lewis Irwin attempted a volley on the left hand side as the ball was played through to him but the effort hit the side netting.

Daventry made changes in the second half as manager Arron Parkinson went to fresh legs in a bid to impact the game and change it on its head.  Ross Harris went off for Carter Price with George Ball and Archie Elmore also introduced onto the field later on.

Daventry took first blood in the contest courtesy of Lewis Irwin in the 71st minute.  The striker was played clean through and found himself one on one with the keeper hitting the ball hard and low to the right of the keeper giving him no chance.

Khalsa continued to threaten all game with multiple attempts on goal, all brilliantly dealt with by Cerga who made multiple saves.  Even when beaten, he got his luck with George Ball heading off the line to keep the score at one nil.

It wasn’t to be for Daventry as the second Sporting Khalsa penalty was awarded in the 87th minute after a Jeff Woodward foul.  Again Cerga went the correct way, but couldn’t prevent Jake Gosling’s well placed penalty.

“It was a good point, hard earnt, we were without the ball for long periods of the game.  The keeper has had a fantastic game saving the penalty. I was pleased we managed to stay with it.  We rode our luck at times but we stayed in the game throwing our bodies around in the box making blocks, tackles, winning first and second balls, the application of the players today was fantastic.”

Arron couldn’t question the commitment of the players on how much they gave to the contest and was pleased for Lewis Irwin getting on the scoresheet. He said:

“The keeper had a fantastic game today like I said and Iustin has been a great servant of the club, since I have been at the club. He came in today and was terrific, he gave us that base to play from. We stayed in the game.”