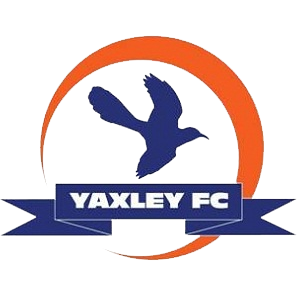 One change to the Town line-up saw Rico Alexander replace Joe Henderson who was suffering from concussion after a knock sustained in the 3 0 victory at Whitworth.

Their opponents were last season’s UCL Premier Division Champions Yaxley who had beaten Town comfortably on the three previous occasions they met.

Heavy rain fell shortly before the kick off however the pitch looked in excellent condition as Town kicked off.

The first chance fell to Luke Emery who got up well to meet an Adam Creaney free kick that went just wide.

Town’s early pressure paid off shortly afterwards when a Creaney corner in the 7th minute found ADAM CONFUE at the near post. His shot was half blocked by a defender but the ball spun up high in the air his head, dropping just under the bar and bouncing into the roof of the net.

10 minutes later and the visitors drew level. Confue was adjudged to have committed a foul on Paul Stebbings on the right hand side. The free kick found Stebbings at the back post and his header gave O’Connor no chance.

Town almost went straight back in front as Taylor Orosz won the ball back in the middle of the park. He found Creaney out wide and Orosz sprinted to the far post just failing to connect with Creaney’s cross.

Town went in front on 25 minutes. Luke Emery was fouled on the edge of the box and Creaney’s free kick was deftly flicked home TOM McGOWAN to restore the lead.

3 minutes later and the home fans were ecstatic as Town went 3 1 up. Good pressure in the box led to LUKE EMERY smashing the ball home in the middle.

Yaxley’s attacking threat was well dealt with by the Town defence. Dean Lukeman prevented dangerman Matt Sparrow from causing any real problems with the Yaxley winger venting his frustrations on the assistant referee.

No changes at halftime for either side.

Town came out all guns blazing and just 4 minutes in, Kieran Fitzgerald made one of his runs inside the box.  Josh Pike dived in clipping his heels and the referee pointed to the spot. ADAM CREANEY stepped up to score his 4th penalty of the season.

3 minutes later and it was 5 1. Luke Emery held the ball up well on the right and, just as he was fouled, he played a superb cross field pass which TAYLOR OROSZ took in his stride before slotting the ball past Sutton.

63 minutes and it was an unbelievable sixth goal for Town. Luke Emery again the creator setting up KIERAN FITZERALD.

Then the goal of the match and it was Town’s seventh. KIERAN FITZGERALD cutting in from the left before curling an unstoppable shot into the top corner to put Town in seventh heaven.

Matt Sparrow pulled another back for Yaxley in the 72th minute.

Luke Emery looked certain to score Town’s eight goal when he dribbled the ball into the box but Sutton saved well as Emery tried to go around him.

Two late penalties for Yaxley, both converted by Dan Cotton gave the scoreline an area of respectability for the Step 4 visitors but in reality they were well beaten.

27 goals in 5 games for Town including 16 in the FA Cup so far this season as they look capable of scoring every time they go forward. No team will relish being drawn against the Town when the draw is made at Wembley this Tuesday. The next round will be played on the 8th September.

This was only the 8th time that this score line had occurred in the history of the FA Cup.

Town now travel to Broadfields United in the FA Vase this Saturday September 1st. Spaces are available on the team coach, contact the club house on 01327 311239 for details.